Dr. Ngugi Kimonjo, a former lecturer at Moi University has given a blow by blow account of the role DP Ruto played in the fall of Moi University.

According to Ngugi Kimonjo, Moi University was reduced to financing William Ruto’s campaigns, more reasons why it has been broke to date.

“Moi University is something very close to my heart…That is where I did my masters and PhD program. I have taught there for six years before being expelled by prof Isaac Kosgey.

I therefore feel bad when I see my alma mater going down the drain and in such a sorry state.But I can tell where the rain started beating us.

It all began when Moi University became a financier of Ruto’s campaign. The University was obligated to channel millions of money every month towards running Ruto’s “empowerment” programmes and Harambee.

In 2018, the supplementary fee had a drastic increase from 400 to 1000 without any solid explanation. The University management then banned cooking in the hostel with the excuse that the electricity bill was abnormally high and that every student was to buy food in the eateries – minimum cost for ugali and tasteless cabbage at 60 shillings.

Then lecturers salaries went down by a half and then accommodation fee for hostels doubled. All this was to accrue money to run Ruto’s campaigns..

Now, the Kisumu campus doesn’t exist. It shut down last year. Kitale campus shut down in February, Nakuru campus is no longer operational, Bomet Campus closed it’s doors a few months ago, West Campus for business Students is now in School of law because they cannot afford rent there..

That is Ruto for you – but I blame Kosgey for auctioning a world class institution.”

Dr. Ngugi Kimonjo also added that he was expelled from Moi University 6 years ago by Prof Kosgey who could not condone him for exposing the dirts at the institution. As a result, he was labelled a tribal goon by then.

“Last month, I wrote something about Moi and the management of one Isaac Kosgey, some minions labelled me a tribal goon. Since Monday, my former colleagues have been on strike, none has been paid for nine months. There are no signs of being paid.

“Where does the money go after being disbursed by the treasury? – RUTO’S CAMPAIGN..We know these things because I am not a mere Facebooker like you, I was part of the oppressed at Moi university.” He added. 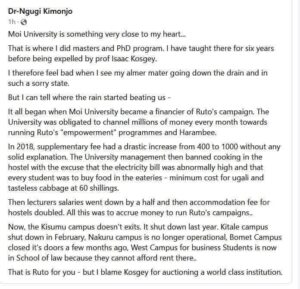 Dr. Ngugi Kimonjo continued: “Moi University is as dead as a dodo! It will take 20 plus years to revive it to where Ayiro left it in 2017/18. Isaac Kosgey has killed one of the biggest universities in Africa. It’s dead, gone. If my president Uhuru doesn’t intervene, we will have to forget the institution. Isaac Kosgey, ask Ruto to give you the money back, lecturers are in pain.”

His sentiments came just a few hours after Moi University was on Wednesday closed indefinitely with students ordered to vacate the premises by Thursday noon.