Gatundu South member of parliament Moses Kuria has alleged that there are 40 trucks that are working for Azimio whose main aim will be to make Ruto lose the election.

According to Moses Kuria who did not provide video or photo evidence to back his claim, 40 trucks are set to leave the Nakuru State Lodge with marked ballot papers to unknown destinations.

“Top Alert!! 40 trucks with marked ballot papers will leave State Lodge Nakuru to various destinations in the next 20 minutes. Media, public please stop them. Most of them have GK registration numbers.” Alleged Moses Kuria. 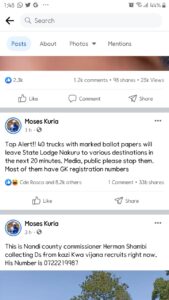 Others accused the Gatundu member of parliament of engaging in a reverse psychology and accusing the deep state of what they plan to do in kenya Kwanza. These were the sentiments from Kenyans:

“If you believe Moses Kuria and William Ruto fraternity then you better think twice. The guy is capable of creating anything as long as it makes people blame president Uhuru Kenyatta and the Azimio team. I am wondering why he has not provided photo or video evidence to back his claims.”

“Moses Kuria should stop playing with the minds of Kenya Kwanza supporters. Who would even mark ballot papers from Nakuru state lodge and let them be transported in broad daylight? This guy must be crazy.”

“I am Ruto’s supporter but I refuse to believe Moses Kuria on his allegation of 40 trucks being used to transport marked ballot papers. One truck is just enough to transport ballot papers to tilt the outcome of the elections if at all the people he is accusing wanted to rig the elections. Resist such lies these guys have just panicked.”

Parastatal CEO who lied about his age suspended