More
HomeNewsDetails Emerge On Why Mutyambai, Kinoti Were Kicked Out Of Office After... 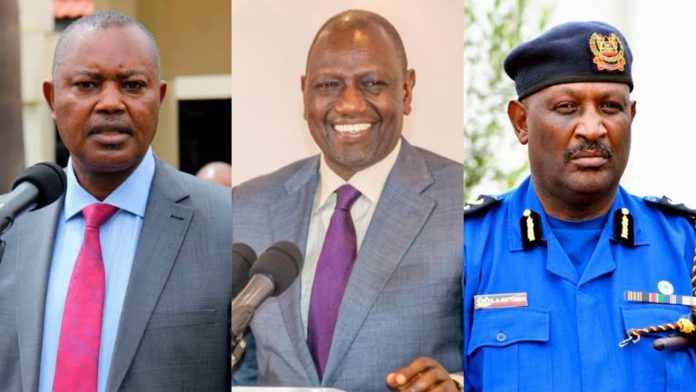 President William Ruto announced that Hillary Mutyambai and George Kinoti had resigned from Inspector General of Police and DCI positions respectively, on the day he announced his cabinet secretary nominees.

Mutyambai’s term was to come to an end in April next year while Kinoti was serving an 8-year term following his appointment in January 2018.

Reports however claim that the duo were fired from their respective offices soon after Kenya Kwanza got an opportunity to lead the country because of mistreating Ruto’s allies.

It is believed that Ruto had to send Kinoti and Mutyambai packing in order to avenge their ill deeds towards him and his allies. Ruto and his allies had, on several occasions, complained about the two, accusing them of weaponizing the war on graft.

At one point, Ruto said that Kenya had the most incompetent Inspector General of police in world and accused him of being a competitor in election. He said that the Kinoti and Mutyambai were used to fight them but promised to make reforms in the police.

Last year, Mutyambai ordered the withdrawal of Ruto’s elite security team while the Kinoti led team was used to investigate his allies. One of such cases was that of Rigathi Gachagua who was dramatically arrested from his home in July last year.

Therefore, there is no way they would have remained in office to work with the new government.

Secondly, Ruto could not work with Kinoti and Mutyambai because of loyalty issues. The two were loyal to former president Uhuru Kenyatta because he is the one who appointed them. Therefore Ruto would also want to work with people he trusts  because matters of security are very sensitive. That explains why he appointed Kithure Kindiki as the Interior and National Administration CS

Finally, Ruto feared that if Kinoti and Mutyambai continued working with him until their term comes to an end, they would sabotage the government because they are closely associated with Uhuru and it is in the public domain that Ruto is not among Uhuru’s favorite persons.

RELATED STORY: Miguna Reveals The Grand Plan He Has For Raila Soon After Returning To The Country