CS Kagwe Plea to Kenyans as calls for resignation intensifies 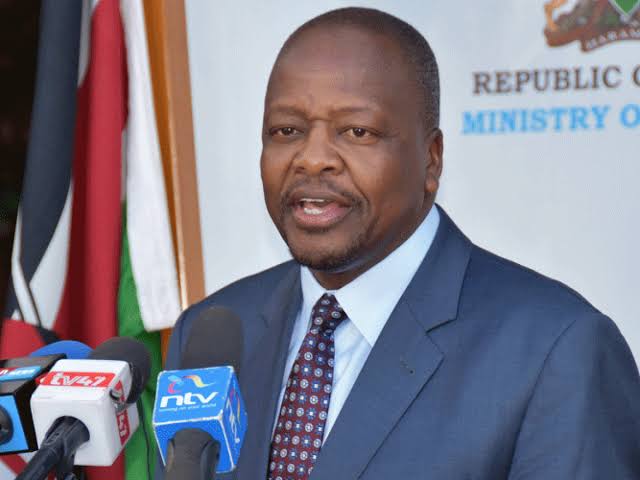 Health CS Mutahi Kagwe is now calling for Kenyans to entrust him following the corruption scandal that hit Afya House.

Through his social media platforms on Wednesday, CS Kagwe candidly stated that he has always supported President Uhuru Kenyatta in the fight against graft.

He defended himself stating that he took over the Health Ministry knowing the deep-rooted mess and lust for money that was denying many Kenyans access to affordable healthcare undermining Uhuru’s administration.

CS Kagwe also expressed his gratitude on how the investigative bodies are exposing the rot in the ministry. Pledging his support to the investigative agencies in unearthing cartels, he added that the President is fully behind him.

“Thank you, President Uhuru Kenyatta; without your unwavering support in this, without your presence, the task would be untenable,” Kagwe lauded.

Moreover, Kagwe made it clear to Kenyans that the fight against corruption in the country has clashed with politics and vested interests threatening Uhuru’s Big Four of Universal Healthcare.

The work of the CS is not to micromanage every just to give advice that works, he isn't in any way involved in telling people to go and steal #MutahiSpeaks pic.twitter.com/DI0tdtgD6V

Kagwe stated that immediately after he was sworn in, he sought the assistance of the National Intelligence Service and the Ethics and Anti Corruption Commission in conducting a thorough forensic audit of the Ministry and the parastatals that support it.

He has also transferred no less than 90 staff, restructured the procurement personnel, suspended suspected staff to pave way for ongoing investigations and sought replacements.

“If you’re willing to stand up, be counted and go full throttle like me, then all we need is the confidence that the other stakeholders- the legislation and judiciary- will stand with Kenya. I am grateful that Kenyans are God-fearing and they know weaponizing health is immoral, non-Christian and an act that even the highest offertory cannot atone,” Kagwe stated, a few days after Kenyatta directed him to submit a report on the KEMSA scandal in 21 days.