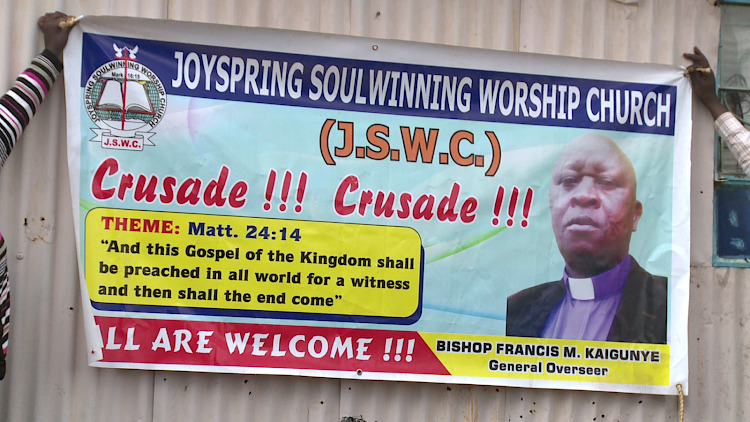 Juja Bishop who ran away with a married woman last year has been murdered.

The body of Francis Mugweru, the clergyman from Joyspring Soul Winning Church was found lying in a thicket 300 meters from his Kiganjo home in Thika sub-county.

The 62-year-old man came to spotlight in August 2019 for snatching the wife and the three children of one of his followers.

Mugweru is said to have been taken from his home on Thursday night and clobbered to death. His body bore deep cuts and his head was hit by a blunt object.

“We want justice for our slain brother, father, and spiritual leader. Police should leave no stone unturned until they apprehend the assassins,” his brother Samuel Njuguna told reporters.

“I saw the body on my to work in Thika town but I did not recognize him. An hour later, I was called by neighbors who told me that he had been murdered.”

According to his brother Njunguna, the bishop’s murder was well planned as his killer stole nothing from the deceased.

His followers at his church – Joy Spring Worship Church, described the man of God as a calm and loving man.

“He was a kind man who related well with people. That is why he managed to establish evangelical churches in Juja and other regions,” Rev Lincoln Mwaniki said

Mwaniki also called on the authorities to bring the killers to book.

The late Bishop and his wife Agnew Wangivi sepa[rated back in 2013 after 34 years of marriage. The two were blessed with three children.

Mugweru is said to have rented a house in the neighborhood for his newfound love. His new wife is a mother of five but two of the children stays with their biological father.

Sources say that the marriage between Mugweru and the woman he eloped with was officiated and his signature appears on the marriage certificate.

Mugweru accused his ex-wife of infidelity and threatening to kill him when he announced he had found solace in his new partner.

“She sold our vehicle and several cows and used the money to advance her adulterous escapades. I have also been living in fear in my own home because she threatened to kill me,” Mugweru alleged.

His body of Mugweru was taken to General Kago Funeral Home in Thika.