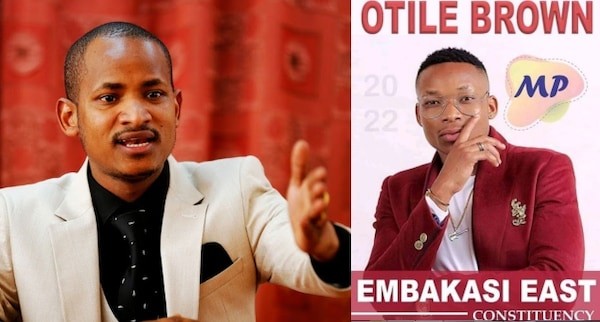 This week, these are the hot and  top stories making headlines in the Entertainment industry.

Embakasi East MP Babu Owino caused a stir when he reacted to a flier that went viral, indicating that singer Otile Brown intends to contest for the Embakasi East Constituency seat in 2022.

Taking to Twitter, Babu who is the current Embakasi East lawmaker dismissed Otile Brown as jocker who has cannot make it in politics and urged the Chaguo la moyo hitmaker to stick to singing.

In a hard-hitting tackle, the MP added that “Slay queens can’t make it in the world of politics”.

The comment elicited mixed reactions with a section of netizens faulting the MP for belittling other people’s dreams.

“So illiterate of you to comment such on someone’s ambition, do you think you own Embakasi East Constituency it will end in tiyaaas (sic)” wrote King Rony.

“You look scared, every other person can be an MP there. It’s not limited to you, let him try his luck” quipped Japheth Kemeli.

Controversial singer Willy Paul has ordered BoomPlay to pull down all his songs from their streaming platform over allegations of favourism and frustrations.

In a long rant, Willy Pozze lamented that the streaming platform has offered him zero support, despite approaching them on several occasions. The singer alleged that Boomplay has been disrespecting him, despite sending over 15 proposal asking for their support.

“…. @Boomplaymusicke needs to look into this matter because wasaniii wanabewa ufala. From today henceforth I’m taking down all my content from @Boomplayke they don’t care about the artist. They only care about the money…wajinga. Take down my content with immediate effect. My album is going to be a success, I have genuine fans and they are gonna make this album a success. Nyambeni uko watiaji nyinyi,” reads part of Willy Paul’s post.

Maria actor Brian Ogana alias Luwi Hausa is the main man on the September Issue of Parents Magazine, gracing their Cover alongside his three adorable kids.

On Thursday, Luwi shared photos posing with his kids on the cover of Parents Magazine stating that he is ready to walk his fans through his fatherhood journey and debunk all the hearsay they have ever heard about him.

In his message, Ogana retaliated that being a Dad never comes with a manual but he is glad to be one.

“#fatherhood #PapaBear Allow me to re-introduce myself and the peeps that have thee brilliant minds to keep me in-check. Being a dad doesn’t come with a manual, am just privileged to be one, am just your ordinary man but a hero in the eyes of my beautiful munchkins @parentsafrica meet my squad/ mbogi genje 😊 #TheOganas( mukitaka professional mourners squad iko tayari🤣🤣)” shared Ogana who asked his fans to check out his story.

However, Netizens joined the conversation gushing over his adorable family while others opted to ask Ogana to also introduce them to the mother to his three kids.