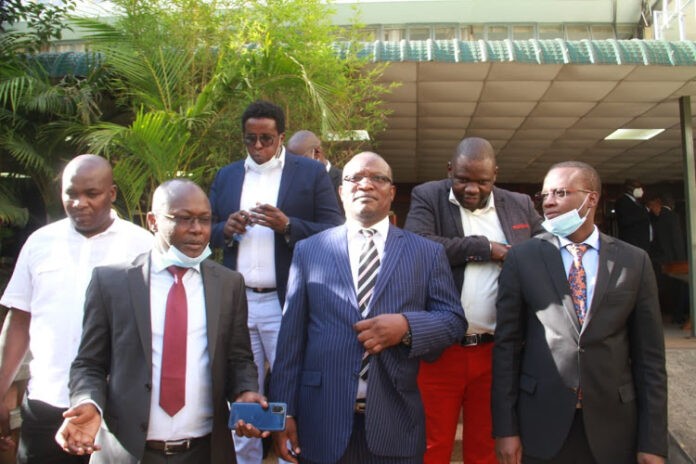 Nairobi county assembly Minority Whip Peter Imwatok on Friday claimed that the lives of the MCAs are in danger.

The threats claims come after a notice of impeachment motion against Governor Mike Sonko was tabled on Thursday at the county assembly.

Talking to the press, Imwatok claimed many MCAs feared for their lives after a message was issued that five of the MCAs were being targeted.

“This morning, there was a message being given outside the county assembly that by the end of next week before the delivery of this motion, five MCAs will have met their father in heaven,” the minority leader said.

“Our members are scared to the bone and that is why many cannot even attempt to join us while we address the media because they don’t want to be seen.”

On Thursday morning, there was a heavy police presence outside the county assembly. Within the assembly premises, a few armed men in blue were seen as soon as the notice of impeachment was tabled.

Imwatok asked the Inspector General of Police Hillary Mutyambai to act on the matter and provide enough to the MCAs during this period.

“We (MCAs) want the IG and other security agencies to take this matter very seriously. The lives of MCAs matter regardless of which house business they choose to undertake,” Imwatok said.

He added that Sonko’s planned impeachment motion “will land next week”. The minority leader urged the governor to respond once the speaker serves him with the notice.

“I don’t think another direction will be taken because the decision is very clear. Nairobi is not a one-person show and house that you dictate the way you want,” he said.

“We (MCAs) are doing this under Article 1 of the Constitution to make sure city residents get what they deserve. We will do our part as an assembly and leave the rest to the Senate.”

Imwato claimed that three men approached him near Ankara Hostel while heading for his office and pointed guns at him. He recorded his statement at the police station under OB number 83/06/02/2020.