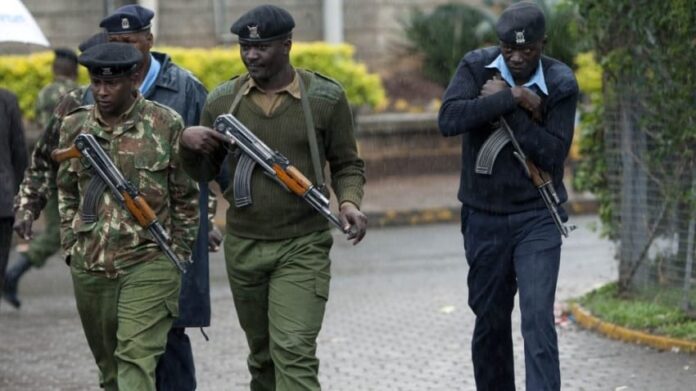 A police officer was on Saturday night gunned down after killing his colleague in a dramatic confrontation in Kamukunji area, Nairobi.

Another officer was reportedly shot and seriously injured during the chaos.

The first victim was Constable Maureen Achieng who was shot and killed inside a police car as she and her colleagues prepared to go for night patrols.

Police and witnesses said the drama began when Costable Lawrence Ewoi picked a quarrel with Achieng over a suspect love affair outside the police station.

However Nairobi police boss Rashid Yakub said they had not established the trigger to the first shooting.

“We have lost two officers in unfortunate circumstances. We are looking into the cause of this issue,” Yakub said.

The argument reportedly proceeded for a short while before Ewoi who was armed with a G3 rifle stepped back and opened fire on Achieng at close range as she sat in the car.

Ewoi is said to have fired four times hitting Achieng in the chest.

The bullets also hit Constable George Gitonga in the left arm before being picked and rushed to the hospital.

“They could not fire back or defend themselves because they were in a car and confined as the assailant fired at them,” said a witness as reported by the Star.

According to the police, Achieng was pronounced dead on arrival at Kenyatta National Hospital while Gitonga was admitted while in stable condition.

As the two officers were being rushed to the hospital, the assailant dashed out of the scene. That happened even as his colleagues trailed their guns on him.

Ewoi’s details were spread along police communication channels and officers on duty warned about his.

A major hunt was initiated for him before he was cornered and killed near Burma market where he had changed his attire and was planning to return to the station.

A police rifle was recovered from him. At the time of his shooting, he did not fire back at his colleagues.

The bodies of the two officers were moved to the mortuary.