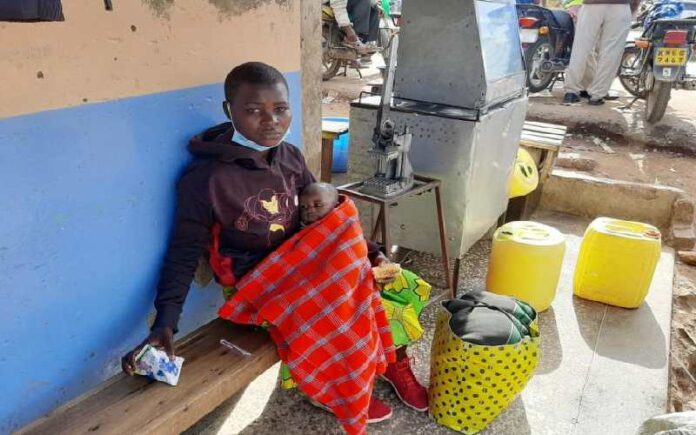 A high school student at Sirgoi Secondary school was left to spend the night in the cold with her three-month-old baby at a bus park in Kakamega county.

The Form three student, Teresia Shiundu said she had nowhere to go after buses hiked fare prompting her to spend the night at the bus station.

“I arrived here on Sunday evening with Ksh 700 yet the buses are demanding Ksh 2,000 to Naivasha. I turned my luggage and spent the night in the cold,” Teresia told The Standard.

The 17-year-old student is said to have been kicked out by her grandmother who reportedly told her to go look for her father who lives in Naivasha.

According to reports, the grandmother claimed she could not provide for her and the bay as well as provide her with school fees.

The teenager who has never been to Naivasha reportedly said she wanted to go beg her father to pay her school fees.

“My mother died in 2008 leaving me under the care of my grandmother. My father lives in Naivasha but rarely comes home,” she told the publication.

It is also reported that the father of her child allegedly disowned her after she informed his parents that she was carrying his child.

The student is among the thousands of learners that go pregnant during the long holiday that was occasioned by coronavirus lockdown.

In December last year, Unicef noted that the closure of the learning institutions simply removed a system that provided children with support including food, safety, and learning.

The closure of schools has however resulted in increased cases of pregnancies and child labor in the country.

“Evidence shows that schools are not the main drivers of this pandemic. Yet we are seeing an alarming trend where governments are once again closing down schools as a first recourse rather than a last resort,” Unicef global chief of education Robert Jenkins said in a statement.

Related: Parents Speak Out On Fate Of School Reopening Amidst Spiking Numbers