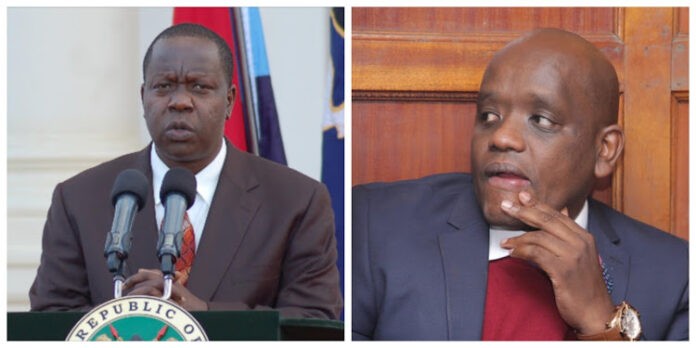 Anti-graft court magistrate Douglas Ogoti has thrown out an application made by Dennis Itumbi in which he sought to be allowed to prosecute Interior CS Fred Matiang’i.

Itumbi accuses the Interior CS, who was then the Education CS, of willful failure to comply with the law on management of public funds during the compulsory acquisition of the Ruaraka property on which two public schools sit.

However, on Friday Itumbi dealt a blow in his case after Magistrate Ogoti accused him of failing to explain how he accessed the information or documents in his affidavit that he intended to use against Matiang’i.

“His affidavit doesn’t contain information on whether he had permission to use the public documents and when and how he obtained them,” the magistrate said.

Among the documents that were submitted to the court included letters written by the National Treasury, Commissioner of Lands, and the Ministry of Education.

Itumbi is accused of failing to produce certified copies of the public documents.

Ogoti also noted that there was no documentation or any demand from the custodian of the documents submitted to the court.

The documents had not been signed.

“The said documents as they are do not meet the legal threshold and cannot be produced and used in court,” th court ruled.

“They (exhibits) do not meet the admissibility test as prescribed in the Evidence Act.”

Itumbi has however promised to seek a review of the court’s ruling.